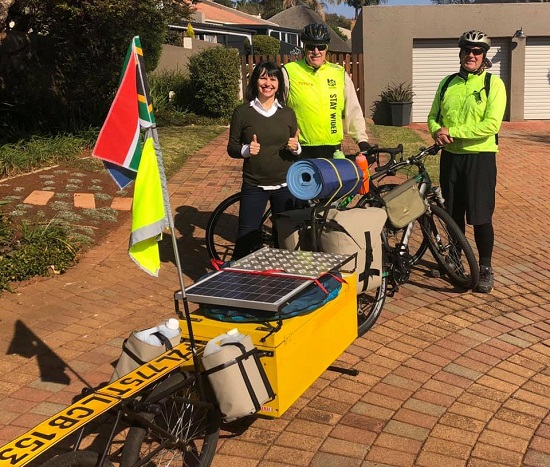 On Friday, 9 April we embarked on a 2 900km cycling journey through the Karoo and Northern Cape to raise funds for Yellow For Survivors, who endeavours to assist organizations helping survivors of gender-based violence.

This initiative is in partnership with the NPC, Yellow For Survivors, founded by Leilani Kuter. Leilani is an anti-rape activist who walked 729km in 2019 and 448km in 2020 to raise awareness and funds for rape crisis organisations.

We hope that this campaign will shine the spotlight on gender-based violence on the Platteland. We tend to often focus on the big metropoles, but there are so many smaller communities that also need help, and this is our way of doing our part.  We trust that the awareness this campaign raises will make a positive difference to help alleviate this pandemic against women and children in South Africa.

Funds raised will be donated to Huis Jabes, a temporary home and rehabilitation centre for victims of family abuse. This includes physical, financial and emotional abuse.  In addition, funds will also be donated to organizations in the Northern Cape, such as the NGO Hands-On Africa, in Middelburg which also offers assistance to women in need. We will keep you posted on the campaign.

However, we aim to exceed the fundraising target to also assist in covering the additional costs of fuel, accommodation, food, insurance of equipment and any additional necessities to help increase the awareness of the campaign, which will span over 60 days.

Our 60-day tour will kick off on the farm Bovlei, in the Noupoort district, from where we will visit various towns on our route, including visiting various towns on our route to Alexander Bay, including Philipstown, Hopetown, Kimberley, Griekwastad, Upington, Springbok, and many more. On our return journey, we’ll make stops in Calvinia, Williston, and De Aar,  concluding our ride in Hanover.

Gerhard Botes (67) was born in the Western Cape and grew up in the Hex River Valley where his family farmed with grapes. From there, life took him on a few interesting journeys that led to him working at Sasol, Eskom, the mines, and the high roads into Africa as a truck driver respectively. For the last 32 years, he earned his bread and butter as a cameraman at the SABC. After working on outdoor broadcasts and news for a while, he shifted over to documentaries where he started doing some journalism, directing, and video editing. He has been in retirement for the past three years and is now following his dream to shine a light on important causes such as Yellow for Survivors and the importance of addressing gender-based violence in South Africa.

Deon Viljoen (67) grew up on the far side of West Rand and played provincial rugby for Transvaal and the Free State throughout the 1980's. He started cycling in the 90's and fell in love with the sport. At this point in his life, he wants to give back to the community that shaped him even more than he has been doing up until now. The Yellow for Survivors initiative to raise funds for the support of survivors of gender-based violence lies close to his heart and he looks forward to cycling 2 900km in support thereof throughout SA with Gerhard by his side.

About Yellow For Survivors

Yellow for Survivors is a SA NPC, founded by Leilani Kuter. It was established to provide survivors of rape and gender-based abuse with resources and safe spaces to find the support they need to start healing after severe, life-changing experiences. These fundraisers include dedications walks throughout the country giving the voiceless a voice and giving them a sense of taking their power back.

On 16 September 1992, Leilani Kuter (aged 18)  was brutally raped and left for dead. She was staying at the NG-church youth centre in Vermeulen Street, Pretoria. She unknowingly let a dangerous man (by the name of "Frankie")  into her room. What followed next changed Leilani’s life forever.

27 years later, Leilani decided to break her silence and speak out about her ordeal and to start a dialogue to empower other women, men, and children and hopefully reduce the stigma of rape.

On 16 September 2019, wearing yellow, (the colour her attacker wore,) Leilani started a 27-day journey, walking 27 km a day to take a stand against sexual assault and gender-based violence in South Africa. The objective was to raise funds to purchase emergency comfort packs provided to young girls when they report sexual assault and go through the process of telling their stories. Additional funds were used to help with rehabilitation and counselling.

The challenge which covered 4 provinces and took over 3 645 hours to complete was supported by more than 300 individuals (some rape survivors), of all ages.

Leilani managed to raise over R250 000 and funds were contributed to Matla A Bana, The Go Purple Foundation, Child Welfare, Nelspruit, 1000 Women Trust and Matrix Men.

This experience made Leilani realize that she can do more to help others. She then founded Yellow For Survivors and has since completed another 448km journey and does dedication walks for survivors and in memory of those who have lost their lives due to GBV. Leilani is also a motivational speaker, ambassador for SA WOMEN FIGHT BACK, WOMEN FOR CHANGE and is focusing on anti-rape techniques, equipping people with self-defence skills. 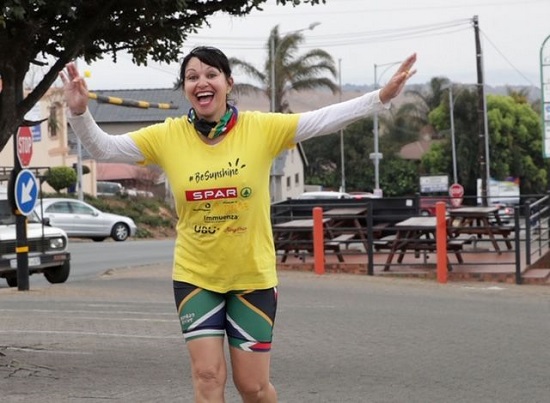 Yellow for Survivors is a SA NPC that has been established to provide victims of rape and gender-based abuse with resources and safe spaces to find the support they need to start healing after severe, life-changing experiences. Yellow for Survivors NPC was founded by Leilani Kuter in 2019.

It was established to provide survivors of rape and gender-based violence with resources and safe spaces to find the support they need to start healing after severe, life-changing experiences.

These fundraisers include self-defence sessions and videos, dedications walk throughout the country, giving a voice to the voiceless, and enabling them to take back their power.

What is Yellow For Survivors