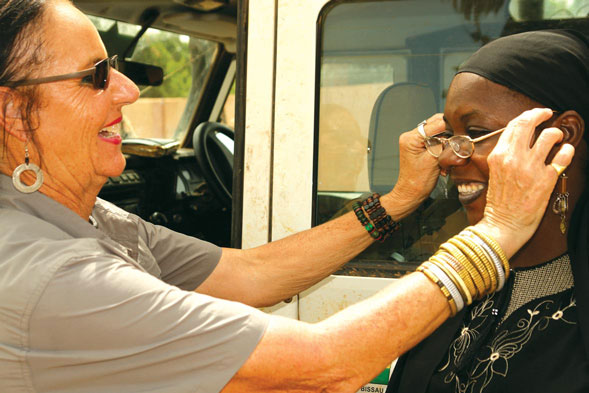 In October 2013 well known climbers Mike Nixon and Andre Bredenkamp, along with Ross Holgate will climb Mt Kenya in loving memory of a very special and incredible lady, Gill “Mashozi” Holgate who passed away nearly a year ago in December. Mashozi - her Zulu name means “she who wears shorts” was often referred to as the mother of the expeditions. Mashozi was a remarkable woman. The Holgates’ adventures are the stuff of legends, whether it is traversing the length of Africa from Cape to Cairo, circumnavigating the globe along the Tropic of Capricorn, the continent of Africa along the outside edge, or the many other expeditions distributing mosquito nets to fight malaria. Kingsley and his expedition team will depart in October to Kenya in the ‘Footsteps of Joseph Thompson” , they will also be scattering Gill’s ashes to the wind on the Olololoo from her favourite place overlooking the vast plains of East Africa’s Maasai Mara. The nominated charity the money will be raised for is ‘Mashozi’s Rite to Sight”

Mashozi’s Rite to Sight - Whilst on the epic Land Rover expedition to follow the Tropic of Capricorn around the world, Gill Holgate (Mashozi) met with an elderly poor-sighted man in the remote Amazon region of South America’s Brazil. He lived in a national park and was about to be removed from the area because officials believed with his poor sight, he may fall in the river and drown.
Mashozi handed him her own pair of readers, he put them on and there were tears of joy when he could see his granddaughter clearly for the very first time. This was the start of Mashozi’s Rite to sight campaign, the distribution of ready reader spectacles to the poor sighted.

Such a simple iniative that changes and improves a life instantly. With a pair of new spectacles poor sighted rural Africans can once again do craft work, read their Holy book or place a worm on a hook for fishing.  The Kingsley Holgate Foundation distributes ready reader spectacles in 13 different strength sizes.  Through this campaign, tens of thousands of poor sighted people now have clearer vision. The aim is for the Kingsley Holgate Foundation to distribute approximately 10 000 spectacles over the next year.

The simple testing is done using eye charts and trying on different strengths of ready readers. The Kingsley Holgate Foundation distributes each pair of spectacles on a hand to hand basis followed with usage and care instructions.

The ABSA Cape Epic has, over the last 10 years been the nucleus, around which I have trained and worked.  It has enabled me to remain focused and fit enough to complete my dream of climbing the 7 summits (seven highest peaks in the continent) which I completed in 2007.I left for Everest within 2 weeks of completing the Epic in 2007 determined to overturn the disappointment of getting close to the Summit in 2004 but having to turn back due to illness.  On Summit day my conditioning (thanks to the Epic training) and the conditions where perfect and in celebration with my Sherpa held the Cape Epic Banner aloft on the Summit.

The Epic over the years has provided some memorable and funny experiences, my best was stopping at an overcrowded water point in 2005 and in confusion I climbed on the wrong bike and was eventually caught 3km’s up the trail by its rightful owner, who very grumpily with a few terse comments got off my bike for an exchange!

Having fulfilled my mountaineering ambitions and seeking more adventures I have teamed up in recent years with Africa’s best known explorer Kingsley Holgate and now participate regularly with him on his African Expeditions as Mountain biker and climber.

Andre Bredenkamp (53),  is the only South African to have climbed the Seven Summits including Mount Everest twice from both the north and south sides. In 2011 he added the Pakistani mountain K3, known as Broad Peak, with an elevation of over 8 000 metres, to his list of successful summits, becoming the first South African-based climber to accomplish this feat.

Ross Holgate is the son of ‘Mashozi’ and the legendary modern-day explorer Kingsley Holgate. Ross has spent most of his life traveling the African continent and beyond with his family, and has visited each and every country on this magnificent continent of Mama Africa. A documentary film-maker and cameraman by trade, Ross has produced numerous documentaries for the National Geographic Channel, History Channel and the BBC. His journeys have taken him from Cape To Cairo following the waterways of Africa and East to West from the mouth of the Zambezi to the mouth of the mighty Congo River. Ross has spent over a decade following in the footsteps of the great missionary explorer Dr David Livingstone and has even circumnavigated the globe in an expedition to follow the Tropic of Capricorn around the world.

To all our generous donors:

The objective of the Kingsley Holgate Foundation is to use the energy of adventure to save and improve lives, so giving something back to the people of Mama Africa.