On the morning of the 18th of October 2020 Cobus my big brother had two seizures and then his heart just stopped. The doctors struggled for 45 minutes to get his heart beating again. He was without any oxygen for a total of 66 minutes. It was at that moment we all knew that if my brother did wake up, that he would most likely have severe, life-changing, and crippling brain damage due to him being without oxygen for such a long time.

We all prayed that we would be wrong but after they revived him, it was already evident that the damage was done. Cobus was put into a medically induced coma to help his brain recover. The doctors started slowly waking Cobus up and with every attempt, a new problem reared its head. He started having more seizures and involuntary movements.

We knew he had a long road ahead of him but with some help he would make it. The doctors battled to keep his blood pressure at the right levels and they had a real hard time getting his temperature down. He did not respond to any of us talking or touching him. His wife sat with him every single moment the nurses allowed her to be with Cobus. Driving to the hospital every day, hoping that he would respond to our voices or us touching him.

After Cobus got out of the hospital, he had to go into a rehabilitation centre to help him with his speech, walking and other movements. The time without oxygen had an intense negative impact on his brain. We were happy that he was on one of the best medical aid plans in the country and they stated that they would cover the bill for a time and that after that period he would have to go home.

This brings us to today and to why I have set up this fundraiser for my brother and his wife. Cobus suffers from severe brain damage and he has a long road to go before he will be back to how he was before. He has severe hallucinations and delusions, and his reality is different from ours. He can’t tell what is and isn’t real and he is currently not able to take care of himself.

He has psychosis and he battles with his short term memory. Cobus has a round-the-clock medicine schedule which he has to take at exact same time. His wife, Yolandie, found a job and she had to get back to work to ensure their monthly expenses are covered to some extent. With the current economical state in South Africa, she wasn’t able to get a job that even covers all of their expenses.

For Cobus to stay with family might help us all financially. But ideally, he needs in-house care in the safety of his own home. He needs a caretaker to ensure he gets the help, medical administration, and personal care he needs during the day while we are all at work.

This Fundraiser is set up to help them cover some of their monthly expense and to cover the costs of having an in-house caretaker for Cobus while Yolandie is at work. If we can collect these funds we will be able to help them with getting the care Cobus needs for the next 12 months. We will be able to make the financial strain that they are experiencing because of all of this, a little lighter.

Thank you in advance for your generosity. If you would like to read Cobus’s full story please visit his page, @cobusjourney, on Facebook. 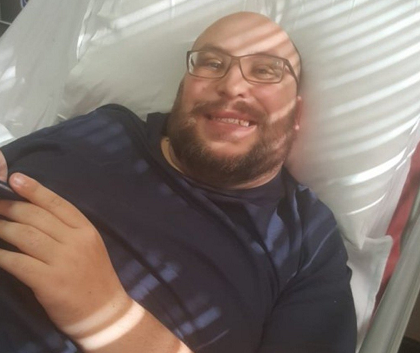 On the morning of the 18th of October 2020 Cobus my big brother had two seizures and then his heart just stopped. The doctors struggled for 45 minutes to get his heart beating again. It was at that moment we all knew that if my brother did wake up, that he would most likely have severe, life changing, and crippling brain damage due to him being without oxygen for such a long time.