Donate to Help the White-winged Flufftail

The White-winged Flufftail was the BirdLife South Africa Bird of the Year for 2013. In sharp contrast to the species selected in previous years, this flufftail is rarely seen and little known. The White-winged Flufftail is Critically Endangered. The species is an enigma; it is a wetland species that occurs in South Africa and Ethiopia, but essentially, according to our knowledge, nowhere in between. It has made erratic appearances, perhaps, lingering a while at some wetlands, moving on at others. The bird’s presence is only ever detected when it is put to flight and gives a fleeting view as it speeds away before dropping back out of sight into the marshy vegetation.

In the 1940 edition of his renowned book on South African birds, Austin Roberts wrote “the White-winged Flufftail is an extremely rare bird … it occurs in marshes and that is practically all that is known about it”. Not a great deal more has been learnt about the bird in the intervening period.

The continued survival of the species in both Ethiopia and South Africa is of mounting concern. Through the involvement of BirdLife South Africa, the Middelpunt Wetland Trust and the Ethiopian Wildlife and Natural History Society, measures are to be put in place to conserve this enigmatic species. 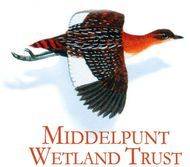 Established in 1994, the Middelpunt Wetland Trust has done groundbreaking work in protecting the last habitat remnants of the Critically Endangered White-winged Flufftail.