This story begins with a heartfelt plea from Alice, a nurse navigator in the oncology division of the hospital group where I work. She, Sister Alice, came to me one day saying, “please help, I am navigating a patient undergoing radiation therapy for prostate cancer. That is going fine, his prognosis is okay, but he is in such a state of psychological distress, he is so sad, I don’t know what to do for him. We just cry and cry for hours together.” Alice was so devastated by her patient’s despair that she wished to find a way to bring some hope back into his life, and thus her approach to me in my capacity as head of psychosocial and therapeutic services for the psychiatric division in the group.

Alice’s patient is called Mr Bangry Harold Matsididi. Harold is 72 years old, and his history is quite simply tragic. His mom died when he was a baby, and he was shunted from pillar to post, uncles to aunts and back again during his growing up years, constantly rejected and never truly knowing a home. He was a bright lad, with big dreams and very keen for education, but this always eluded him as he kept moving around. He worked part-time on a golf course to earn money, but this was not enough to keep body and soul together. When he was a young teenager, just having completed Grade 8, Harold was living in Alexandra Township where he was witness to and a victim of the violent, forced removal of the Alex community to Soweto. This event prompted an interest in the political events of the time, and Harold, being left pretty much to his own devices, got caught up in the liberation struggle. At a stage, he was arrested by the Security Police for being in the possession of weapons. This led to thirteen months in detention which were pure hell for Harold. He was severely tortured, one on occasion he had to endure 3 unbroken days of electric shocks to his testicles, which eventually resulted in him passing out, falling, and cracking his skull open. It was a miracle he survived, since this deep wound was not treated, on the contrary, he was told that he would hang by a rope and die anyway. He endured solitary confinement, up to seven days without sleep, and being subjected to a form of torture called the “helicopter” (hands tied behind the back by a rope then pulled with the force of a truck over a tree thus forcing the arms 360 degrees upwards and dislocating them from of their sockets). His neck is permanently damaged due to this.

Eventually, Harold was sent to Robben Island and only released in 1990. His entire youth and his formative years (29 years in total) were spent at war or in prison.

Ten years after release, Harold developed swelling in his prostate gland which had to be removed. He believes it was the shocks to his testicles that led to prostate problems. Despite the removal of the gland, in 2016 Harold developed symptoms again and he was diagnosed with cancer. Harold was devastated, he believed this was his death sentence. All the losses and tragedies of his life came together at this point, and he became severely depressed. This was when Sister Alice approached me. I said to Alice at the time, “We can’t decide for Harold, please ask him what would be the most meaningful thing for him to lift his spirits.”

Alice came back to me and said, “Harold gave this thought, and he has decided that what he would like is for us to help him set up a support group for twelve of his fellow Robben Islanders, all of whom are in the same situation that he is in – traumatised, marginalised, poor, with failing health and little access to medical care, but with a strong sense of loyalty, camaraderie and friendship.” I was most impressed with this wish, instead of asking for something selfish, Harold, in the true spirit of ubuntu, asked for something to benefit his fellows.

And so it came to pass that we set up our group of twelve.  A more delightful group of men it would be hard to find. Despite their past suffering and difficult circumstances, they are dignified, resilient, well-informed, highly principled and full of humour. Our meetings are filled with fun and laughter, despite the sadness inherent in each man’s story. Their commitment to helping each other is humbling. They worry not for themselves, but for their families and for their comrades who have fallen onto such hard times that some have to live under bridges like hoboes. The fund we are wanting to set up is for medical care, trauma counseling, food, transport to the group meetings as well as hospital or other medical appointments, and for shelter if one of their comrades has become totally indigent or substance dependent (very common among war veterans). It might include stretching to a treat like lunch or an outing, delights that many of these men have never experienced.

When last I saw Harold a few weeks ago he was looking so much better. I complimented him on how good he looked and he responded by saying, “well, I have my support group and two ladies in my life now who have given me hope and a second chance at life.”

If you are able to support this fund, in a big or a small way, you will be contributing towards giving twelve men, all of whom have sacrificed their lives for our freedom, a second chance at life. Any donation is welcome, however small, it will be received with enormous gratitude. 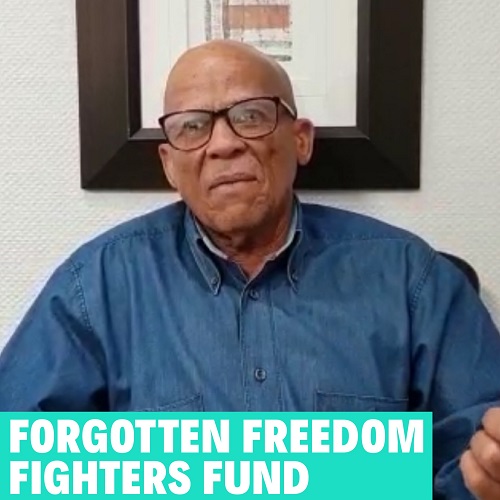 The Forgotten Freedom Fighters Fund aims to support 12 former Robben Island prisoners with access to medical care, trauma counselling, food, transport to the group meetings as well as hospital or other medical appointments.