The Leadville Trail 100 Run (aka The Race Across The Sky) is an ultramarathon held annually on trails and dirt roads near Leadville, Colorado, through the heart of the Rocky Mountains. Because of its altitude and steepness, it is considered one of the most difficult 100-mile races. First run in 1983, the race course climbs and descends 4,800m, with elevations ranging from 2,800-3,850m. In most years, fewer than half the starters complete the race within the 30-hour time limit. Hypoxia, dehydration, hypernatremia and hypothermia are all side-effect risks of running the distance at such an altitude.

The course is a 50-mile (80 km) out-and-back dogleg, starting at 3,100 m in the town of Leadville. The centerpiece of the course is the climb up to Hope Pass at 3,850m (view course profile below), encountered on both the outbound trek and on the return. The gruelling course has various aid stations for the runners, who will likely encounter a variety of weather conditions along the 100-mile route, including a warm day during the U.S. summer and oftentimes dropping to below zero at night in the Rocky Mountains (which to date still has a sizeable amount of snow at its peaks).

About the runner’s participation

Giles Hedley joined Barak Fund Management in November 2015 and has seen the company grow significantly over this time, all under the watchful eyes of co-founders of Jean Craven and Prieur du Plessis. Giles has been a passionate runner for a number of years, completing several well-known longer-distances races in South Africa including the Comrades Marathon, Two Oceans Ultra and Otter Trail Marathon. Following in the mantra of MadSwimmer, Giles decided to pursue the opportunity to take his running to a more extreme level, and put his name into the race lottery at the end of 2018 after first reading about the Leadville 100 Race in Born To Run: A Hidden Tribe, Superathletes, and the Greatest Race the World Has Never Seen, the book written by well-known sports journalist Christopher McDougall.

Acceptance into the race came as a bit of a shock in early 2019, and whilst preparations have been underway to get ready for the challenge, there are nerves aplenty as the clock ticks down to August 17th. Giles will be representing the MadSwimmer Charity for the event and will be donning the Charity’s running vest, taking on a new leg for the traditional mad swims that Jean and his crew put themselves through on a regular basis. No doubt after the (hopeful) completion of the race Jean and co. will go in search of a swim to complete up in the Rocky’s. Giles is excited to head over for the journey and is looking forward to be representing the MadSwimmer team on a new adventure and everything that the Charity supports for underprivileged children in South Africa. As MadSwimmer Founder Jean says, “Facing threats might mean we’re mad, but we have to be even madder not to care”.

Quick update on the race preparation: Giles and his seconder for the race Dave had the privilege of meeting Ryan Sandes in Cape Town on July 15th, Leadville 100’s 2011 winner. Ryan has been South Africa’s most successful international trail runner and has won numerous prestigious and gruelling events around the world in his career. Whilst Ryan’s approach to races is naturally on a different level, it was hugely beneficial to get some valuable insights into both race day expectations and pending preparation, and the insights gained from a South African running legend were inspiring and encouraging. Whilst the task will no doubt be daunting, all Barak stakeholders continue to encompass 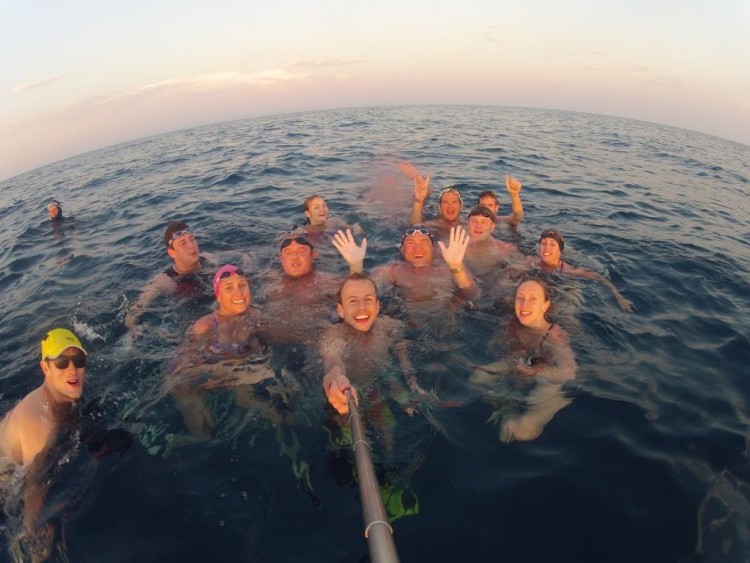 Madswimmer is a registered non-profit company consisting of individuals involved with daring open water swims to raise funds for children’s charities. They are established businessmen and women in their own right, but also do these extreme, adventurous swims. Take a look at some previous campaigns here to see how they managed to raise over $420000 over the past 13 years.