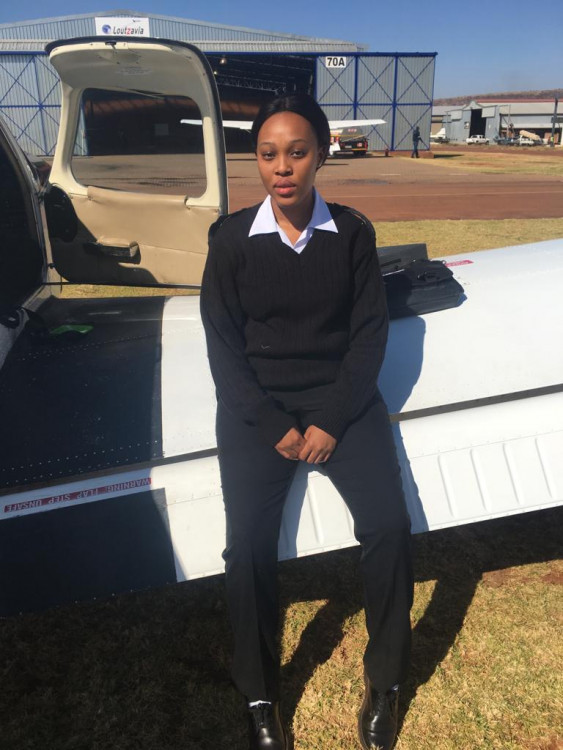 Growing up Lungi wanted to be an astronaut but just like any other child, her interests changed when she realized that job opportunities in South Africa were rather limited for Astronauts. Then in June 2017 when she was in the 11th Grade, South African Civil Aviation Authority (SACAA) participated in a “Bring a girl child to work” which was structured more like an Open Day set up. Lungi’s mom’s friend who works at SACAA invited her to come through with the view for Lungi to be in position to validate her interest. The Open Day show cased careers in Aviation such as Air Traffic Controllers, Aviation Doctors, Air Crash Investigators, Search and Rescue, Piloting etc.

At the time Piloting was to her just an interest until she was taken though a presentation by a young woman who happened to be a Pilot at SACAA, she just blew her away by bringing up a visual positioning of what really happens in the life of a pilot. It was then that Lungi knew without a doubt that a Pilot is what she had to be.

Fast forward to twelve months later, the Airforce Waterkloof Based had “bring a family for flying day” where family members where given an opportunity to fly around Pretoria in a Casa 212.200 series plane. At that point Lungi was so excited to have yet another opportunity to spend some time experiencing her passion. This was her fist time flying and she enjoyed the views as well as being a passenger in the plane.

In 2019, Lungi enrolled at Loutzavia Flight Training Centre to start with her flying career.  To say she was excited is an understatement, and on discovering the cost of the pilot training, the excitement was starting to grow dim. Lungi is the 1st born of 4 children and the unforeseen financial pressures placed undue pressure on her parents in allowing them to continue with the funding.

I really want to help Lungi reach her dreams and help take the financial stress off her family.

I am Tatai Manganyi and I am requesting your generous assistance in helping Lungile Makhubo who is my best friend's daughter.  Growing up, Lungile had dreams of becoming an astronaut and is currently working towards her pilot's licence.  It's an expensive undertaking and her family are really struggling to keep up with her tuitions fees.