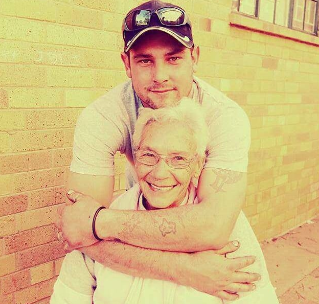 My name is Mynette Smit, I'm raising funds for my brother Jacques Le Roux, 33, in Coligny. He was involved in an accident that left him paralyzed and that caused him to lose his job. Times are tough and I want to make a difference! Any help will be appreciated!

I was the 13th of March 2019 at 16:45 that my brother had a freak accident and was electrocuted with overhead electrical wires, he fell about 7meters straight on his head and broke his back in several places and 7 ribs, he had 3rd-degree burns on his neck and his leg.

After the accident happened Jacques Le Roux were rushed to Lichtenburg hospital, he was put on a drip for about 3hours and then the doctors told us he must be transferred to Mahikeng State Hospital - when he arrived there the staff immediately put him on monitors but he had no feeling from his chest down. After lots of scans, the doctors saw that his back was broken in multiple places and they need to schedule a date for an MRI scan in Klerksdorp Tshepong Hospital. Upon his arrival at Tshepong, the doctors could not do the MRI Scan because the pain was too much and he could not lie still in the small space. He waited for 13 hours before being admitted because no one knew why he was there, he was admitted in General Ward first but then the doctors sent him straight to High Care. The doctors sat by his bed for 2 days straight thinking he is not going to make it. After more tests, they discovered his lungs are filled with blood and 7 broken ribs, they immediately started to drain the blood from his lungs and then discovered he has Pleural Efusion (vog op die hart). They drained 6litre blood from his lungs. After that was sorted they took him to theatre for his skin transplant on his leg, the doctors were skeptical that the skin graft will be a success but with a second operation, they saw that it attached very good! 2 months after the skin graft he went for his first back operation, after 9hours in theatre the doctors was happy and said that it was a success! 2 weeks after the operation he was discharged from the hospital (very excited and grateful!) He went for regular check-ups and a month after he was discharged he went back and they took Xrays and the doctor told them his back firmly grew back together, after they said that would never happen! In August they scheduled another operation to take the pens out of his back, when they opened up his back the doctors saw that the pens and bolts were already loose, his back rejected it when it grew together.

After all the ups and downs he is at home now and he is getting stronger by the day! We believe that a miracle will happen because a miracle from God did happen when Jacques back grew back together!

Reaching my target will mean that we have made a difference in his life and that we can give him a full tummy at night.

All raised funds will go towards buying food for the house - enough food that will carry us a very long way!

Funds raised will be paid into the beneficiary's bank account. 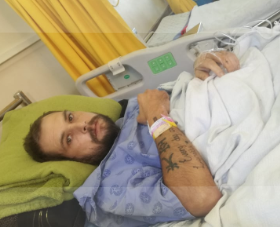 Mynette Smit (23), is raising funds for her brother, Jacques Le Roux (33) in Coligny. He was involved in an accident that left him paralyzed and that caused him to lose his job. Raised funds will go towards buying food for the house.