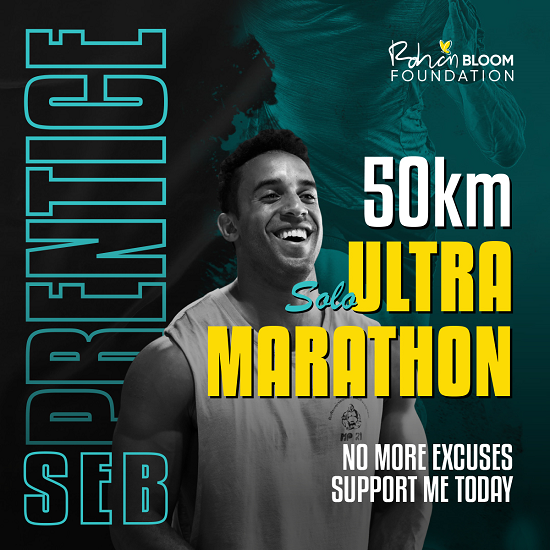 When I initially began preparing for this 50km solo ultra-marathon, I knew that I wanted to make it something bigger than just the race itself, I just was not sure about which cause, or Foundation I wanted to support. Having grown up in the Bishops community, as well as having a mom that pushes me to excel at my strengths, I have always deeply enjoyed sports and physical activity.

During my time at Bishops, I was aware of what Rohan went through and how hard he fought his illness, and I could think of nothing worse for a young sportsman than having to endure such a debilitating battle. About 5 years after leaving Bishops, I moved into an apartment block in Sea Point, where I met Rohan's father, Rod, who inspired me from the get-go, with his passion for the power of sport and the way he spoke about his son and his sporting endeavours. He was wearing a Rohan Bloom Foundation t-shirt at the time which inspired me even more.

The Foundation seemed connected to my day-to-day life, as on various occasions a few of my clients brought it up in conversation. Together with living in the same apartment block as Rohan's father and the constant presence of the Rohan Bloom Foundation in my life, this led me to the decision that I wanted to reach out to Rod and initiate a partnership for my run, to help raise funds for the Rohan Bloom Foundation, in memory of Rohan.

The Rohan Bloom Foundation is building the First Specialized Paediatric Palliative Care In-Patient Hospice in the Western Cape.
We will offer pain relief, dignity and appropriate care for the child in a place of comfort whilst also offering the entire immediate family with the emotional and psychological support they desperately need.

The Rohan Bloom Foundation was formed after Rohan died at the age of 14 from a very rare form of cancer called Ewing's Sarcoma.