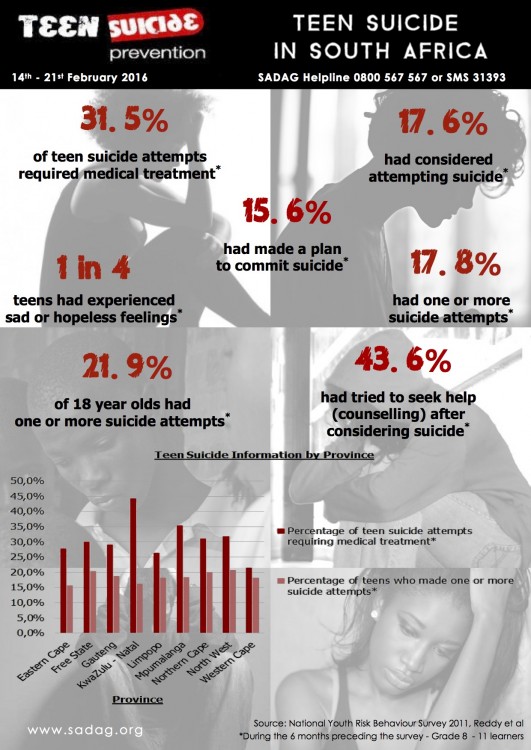 SADAG have helped over 75 000 children in the last few years in various schools across all nine provinces. Very often SADAG targets impoverished areas to address the issue of Teen Suicide Prevention, Bullying and Substance Abuse Prevention. There is a definite need to reach more teenagers on these two issues, as 31.5% of teens have attempted suicide with 17.5% of the teens having tried to commit suicide more than once. KwaZulu–Natal has the highest attempted suicide rates, with 44.1% of those teens having attempted suicide requiring medical treatment.

Each school talk, which can target over 1500 students, has 10 trainers for the day and schools are addressed class-by-class. After the talks, time is set aside to allow for individual counselling. We discuss issues such as depression, teen suicide prevention, substance abuse, bullying, trauma and grief. We hand out materials, brochures, #WeCare armbands and stickers with the emergency numbers with Teen Suicide Prevention speaking books to each class. The cost to run a programme in one school is R8000.

The funds raised from this campaign will go towards 10 school talks in disadvantaged communities around South Africa. Each learner will get a new #WeCare armband with SADAG’s contact information on it. So if any student ever feels depressed, anxious or suicidal – they will know who to call for help.

Please make a contribution towards our campaign and help us reduce teen suicide in South Africa.