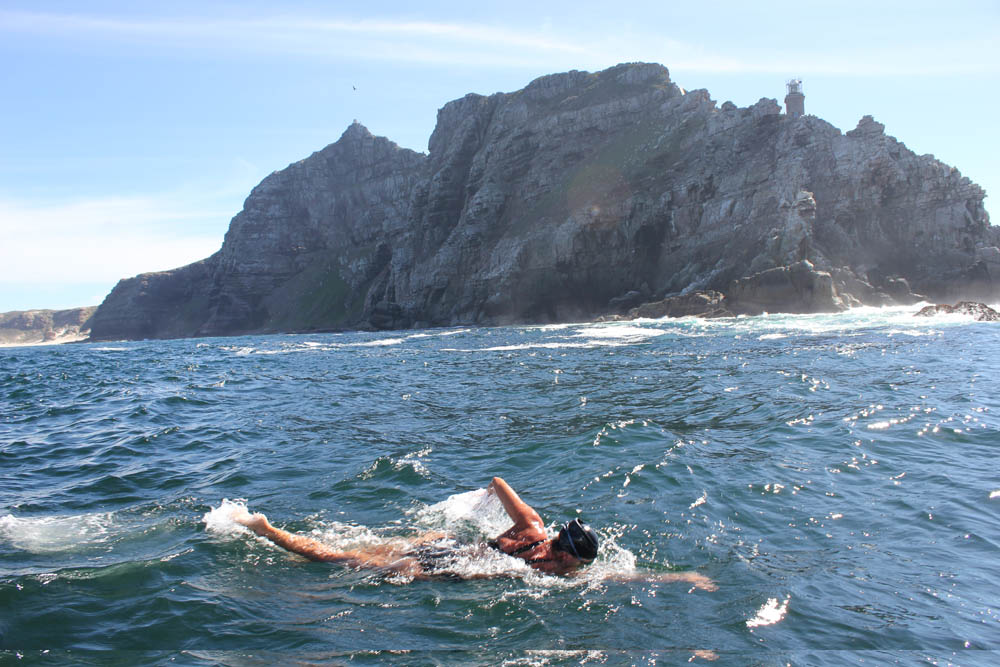 Carina Bruwer, lead player of SAMA Award-winning instrumental pop group Sterling EQ, successfully rounded Cape Point, finishing the 8km extreme swim equipped only with a standard swimming costume, cap and goggles, according to open water swimming rules. The “Swim for Hope” was in support of the Little Fighters Cancer Trust (LFCT), a local charity that offers support to children with cancer and their families, which Carina and Sterling EQ actively support, and marked Carina’s return to open water swimming after a 6 year break during which she became a mother of two.

The extreme swim through wild, cold and shark infected waters, started at Dias Beach on the western side of the point, and ended 8km east at Buffels Bay. Icy water temperatures between 11,5 and 14 degrees posed the biggest challenge to Carina, who, together with her supergroup Sterling EQ, just won a Ghoema Music Award for Best Instrumental Album of 2013. She was crushed by waves off Diaz beach and lost a pair of goggles in the process, got stung repeatedly by a school of jellyfish, and had to fight severe currents around the point. She completed the swim in 2h36mins – 16 minutes slower than the record she set for the swim in 2004.

“It was extremely tough, but I’m very happy with the result. Even while at the prime of my marathon swimming career, I would not normally have swum in waters under 13 degrees. LFCT and the children with cancer it supports, were instrumental in this swim – they inspired me to stay strong and really fight the odds. I had to push through the extreme conditions for only two and a half hours, as opposed to the challenges and trauma they face on a daily basis”, Carina said at Buffels Bay after the swim. “I strongly ENCOURAGE anyone who is able to make a contribution – big or small – to the Bag of Hope project to please do so in my honour.”

Mandie Erasmus from Little Fighters, who was part of the team on the Cape Long Distance Swimming support boat, said “Carina’s determination and strength during the swim matched that of the children fighting cancer every day. Being a part of her support crew today has inspired the LFCT team to keep pushing harder at what we do. She fought tides and jellyfish, survived severe water temperatures and even managed to make it through the fishing nets of crayfish poachers. We cannot express the gratitude we feel after witnessing her in action today- truly heroic!!”

“Swim For Hope”
Carina and The Little Fighters Cancer Trust are hoping to raise R25,000 for the Bag of Hope Project. Public as well as corporate contributions are encouraged and can be made on www.backabuddy.co.za/champion/project/swim-for-hope. Corporate sponsors can also contact Little Fighters Cancer Trust directly on 073 729 6155 or [email protected] for organizational information such as taxation and BEE benefits, as the organization is a registered NPO with PBO status.

Carina Bruwer – brief background
Carina made her mark on the open water & marathon swimming record books during 2004 – 2006, having completed and set new records for numerous internationally renowned ocean crossings including the English Channel, False Bay (both 36km), Gibraltar Straits (16km), swims in Greece, USA and Italy, and various Robben Island crossings (7 – 10km), amongst many others. Carina stepped out of the open water swimming limelight in 2007 to start a family, while Sterling EQ’s success (together with a rigorous touring schedule since 2009) had also contributed to a shift in focus.

Little Fighters Cancer Trust
The Little Fighters Cancer Trust supports children diagnosed with cancer and their families, by offering wide variety of individualized assistance, including, but not restricted to, provision of food and groceries, transport, clothing, furnishings, bedding, medication, medical equipment and 24 hour emotional support. Parents of diagnosed children often lose or leave their jobs to be able to provide the special care and support required, which, together with the huge emotional strain of having a terminally sick child, often disables the family financially and emotionally. Little Fighters steps in to help create a support system in order for the children and their families to maintain their dignity, and with it, provide hope.

Promoting and advocating Childhood Cancer Awareness is another of Little Fighters Cancer Trust’s priorities. Childhood Cancer is responsible for more child deaths than HIV/AIDS, Malaria and Tuberculosis combined. (South African Tumor Registry, 2011) Less than one third of actual childhood cancer cases are recorded in South Africa. Many children are misdiagnosed or not diagnosed at all due to a lack of awareness concerning the Early Warning Signs of Childhood Cancer. An increase in Awareness, also among medical staff, will lead to earlier diagnosis of childhood cancer cases, resulting in a higher percentage of survivors.

One of the organization’s most tangible projects is “Bag of Hope”, through which they distribute bags filled with essential provisions to cancer children and their mothers at hospitals in the main Pediatric Oncology treatment centers in the Western Cape and Gauteng. Last year they distributed 800 bags (200 short of their goal of 1000). They are hoping to raise this number significantly this year, and extend the service to the Eastern Cape and KZN. With her “Swim for Hope”, Carina hopes to generate funds and awareness to give this project a significant boost.

STERLING EQ
Boasting four successful releases, over 600 live performances since 2008, and thousands of followers worldwide, Sterling EQ is one of the most successful instrumental bands South Africa has ever produced. The group has performed in 10 countries, shared stages with local and international icons, and has enjoyed extensive international recognition as well as local awards and nominations. The live DVD, which was awarded a South African Music Award in 2011, was also produced by Carina. 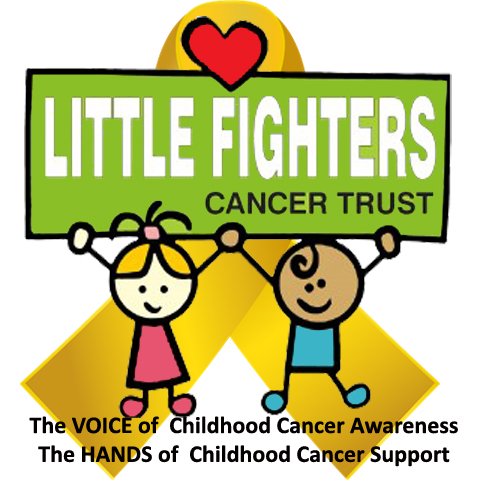 The Little Fighters Cancer Trust supports Children with Cancer and their Families.

In cases where there is no family support structure, such as in oncology wards in Children's Homes and Places of Safety, we are often the only line of support which these young Cancer Fighters have.

Our approach to support is holistic, where we look not only at providing practical and financial support, but also concentrate hugely on emotional support and providing relief where needs, in and out of hospital, are concerned.