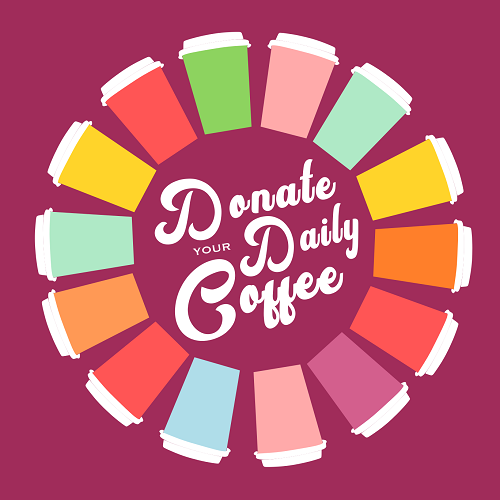 The Coffee Collab is an initiative started by a group of individuals, creatives & social advocates wanting to do good and give back during this difficult time of the COVID-19 outbreak and South African National Lockdown.

As a generation of coffee lovers, a huge portion of our budgets goes toward our daily morning coffee. Spending on average R25 for a "flat white" each morning, we can easily rake up a bill of R525 in 21 days. How about we collaborate during the nationwide restrictions that have been put in place, and direct the funds we would be spending each morning on our morning coffees toward causes that are doing amazing work in South Africa?

How you can donate? Consider using the following guidelines:

Add a Tip for the Barista: +R3

For as long as we as a country feel the impact and consequences of the Nationwide Lockdown, the raised funds will be donated to a  charity nominated by our supporters.

This will allow different organisations with various needs to benefit at different times, whether they be health, social services, or food and essentials.

We previously partnered with an organisation named The Re-Trade Project which has received an overwhelmingly positive response from our supporters.

Now, we are partnering with Marrow Broth (via the Anton Lubowski Educational Trust), who will be providing nutritious food to their neighbours who are most in need.

Many Individuals during this time of the National Lockdown are unable to work or gain access to supplies or basic needs. Through our initiative, we aim to be able to provide meals for members of the community who are struggling as a result of the restrictions in place and loss of income.

In partnering with Marrow, we hope to be able to fulfil this need in our communities while simultaneously helping a local restaurant stay afloat and keep their staff employed under all of the restrictions of trade during the lockdown.

All funds raised will go towards Marrow Broth, a Cape Town restaurant which is linked to The Anton Lubowski Educational Trust. Marrow Broth will be using the funds to prepare and distribute healthy, high protein meals to the community of Philippi in Cape Town.

Their aim is to distribute Marrow Bone Broth Stews and Soups to hundreds of Capetonians (children and families) in need.

A donation of as little as ZAR20 a day, a week, or a month makes a huge difference.

The Anton Lubowski Educational Trust was established in 2007 in memory of Namibian-born human rights lawyer and activist Anton Lubowski.

So, his family, led by his two adult children Almo and Nadia Lubowski, founded the trust, to support the growth and development of young people.

Today the trust is proud to support a range of incredible initiatives- each different, but grounded in improving the quality of children and their families’ lives. They include various small ECD centres in Khayelitsha and Philippi.

Anton Lubowski was born in Namibia and became a lawyer in 1981. Moving on to become an advocate, Anton fought extensively for the rights of Namibian workers, becoming a member of the National Union of Namibian Workers. In 1987, Anton initiated and became the director of NAMLAW, an organisation concerned with the development of draft legislation to replace the racist legislation of the South African administration, for implementation in Namibia after independence. In 1988, together with Benazir Bhutto, he received the Bruno Kreisky Prize for achievements in Human Rights.

Throughout this turbulent time, Anton was detained six times, twice in solitary confinement for long periods. He firmly believed that apartheid had no future and that South Africa’s illegal occupation of Namibia had to end. His convictions drove him to work tirelessly to free Namibia and its people from the oppressive apartheid regime.

On 12 September 1989, Anton was brutally gunned down in front of his home, which shocked the nation into quiet despair. Hundreds of people attended numerous memorial services held all over the country. South Africa signed the ceasefire to end the war between the two countries, and independence was on its way.

After his death he has remained an inspiration to many people for his enthusiasm, his positive attitude about the region’s potential and his passion for human rights.

His last message was clear: “Education is the key to a better future and people must unite, irrespective of colour, ethnic origin, sex, race or creed.”

The Current Projects that the Anton Lubowski Educational trust supports is to provide various forms of support, with two main intentions: Firstly, to empower the woman that have started these centres to continue being the entrepreneurs that they are, and secondly to provide the young children with meaningful and stimulating educational opportunities that give them the best experience of learning.

Understand Hope and Care: In August 2011, Understand Hope and Care a small Educare Centre in Khayelitsha received their first temporary structure due to the generous donations of Landis & Gyr and Heinz Guetensperger from Roots & Wings Trust. The above stakeholders hired the Anton Lubowski Educational Trust to project manage the implementation of the building process.

Simunye: A phenomenal educare centre situated in the Better Life Community in Philippi, Cape Town, Simunye is a pre-school. Due to municipal rezoning plans, the school has had to be relocated many times, but its tireless leader Nosipiwo has never been deterred by these set-backs and is currently operating from a rented house in Philippi through donations from a fundraising project in Switzerland: Mein Dein.

Imizama Yethu: Currently there are 100 children at Imizamo Yethu Educare Centre. The school employs four staff members. Nomakhaya is the principal. Out of the 5 teachers, 1: Babalwa, is training to be qualified in Early Childhood Development (ECD). Nomakhaya started looking after 6 children in her home. This has now grown tremendously, as she is the only crèche in Vukuzenzele. This project is supported by donations from a Give Hope, fundraising in Switzerland.