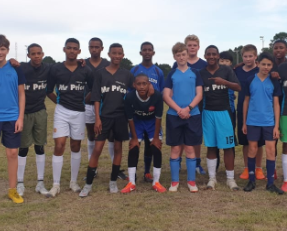 Zinedine Lubbe is a 14-year-old, grade 9 student, from the Cape Flats Mitchels Plain an aspiring soccer player. Soccer was introduced to him by my dad ( his late grandfather ) at a very young age as his father exited his life while he was just a baby. We spent Saturday mornings on the field from as early as 7 am. That was our routine every week for every soccer season Until I lost my dad to cancer 6 years ago.

Growing up in a gang-infested community (Mitchell’s Plain) and not owning a car made it harder and harder to get to these games and to practice for that matter, and I eventually had to withdraw him from his club. He started playing again when he started High School and is still playing for his school club. It’s through his soccer coach that I learned about this amazing opportunity for Zinedine to go abroad on what is not only a soccer tour but a life coaching tour. It is mostly aimed at young, aspiring soccer players from all walks of life but also who come from underprivileged backgrounds. And I jumped at the chance to enroll him. After all, it’s his love for the game that has kept him on the straight and narrow. Although the temptation was there, his love of life was even greater!

I knew it would be a challenge, but I thought that I could at least get his dad’s support on this, if nothing else. After all, it’s a once in a lifetime opportunity! He gets to travel and do what he loves, play soccer! Not to my surprise, but much to my disappointment, his dad failed him… again. I was determined to give him this… this one chance to at least see some part of the world. So I did what I had to and paid the R6000.00 deposit needed to secure his flight.

He has since started a takeaways in a bid to raise the money needed. But raising R45 000 is no easy task when you have no capital, to begin with. So since the beginning of September, we have been trying to raise funds with these takeaways. Easier said than done. But we are determined.

Zinedine Lubbe has been selected to be part of the Sim
Tours Eagles Team that will be touring to Manchester UK in April 2020.

Your contribution will allow Zinedine Lubbe to go on this tour as it would be an opportunity
for himself and other talented individuals to travel abroad and have a lifetime experience.

All I am asking is that if anyone can assist him in any way, shape or form it will be a Godsend. I want nothing more than to see my son be successful. To show him that there is more to this world (namely, Mitchell’s Plain) than gangs, drugs, rape and murder.. That there a whole world out there and it can be his oyster through hard work and determination. I don’t want him to be another statistic.

Funds raised will be paid directly to the relevant institution. 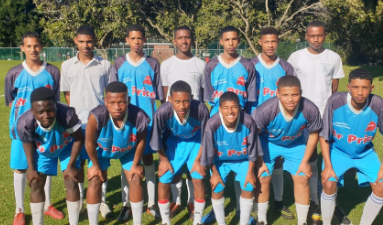 Zinedine Lubbe is a 14-year-old, grade 9 student, from the Cape Flats Mitchels Plain an aspiring soccer player. Zinedine Lubbe has been selected to be part of the Sim Tours Eagles Team that will be touring to Manchester UK in April 2020.