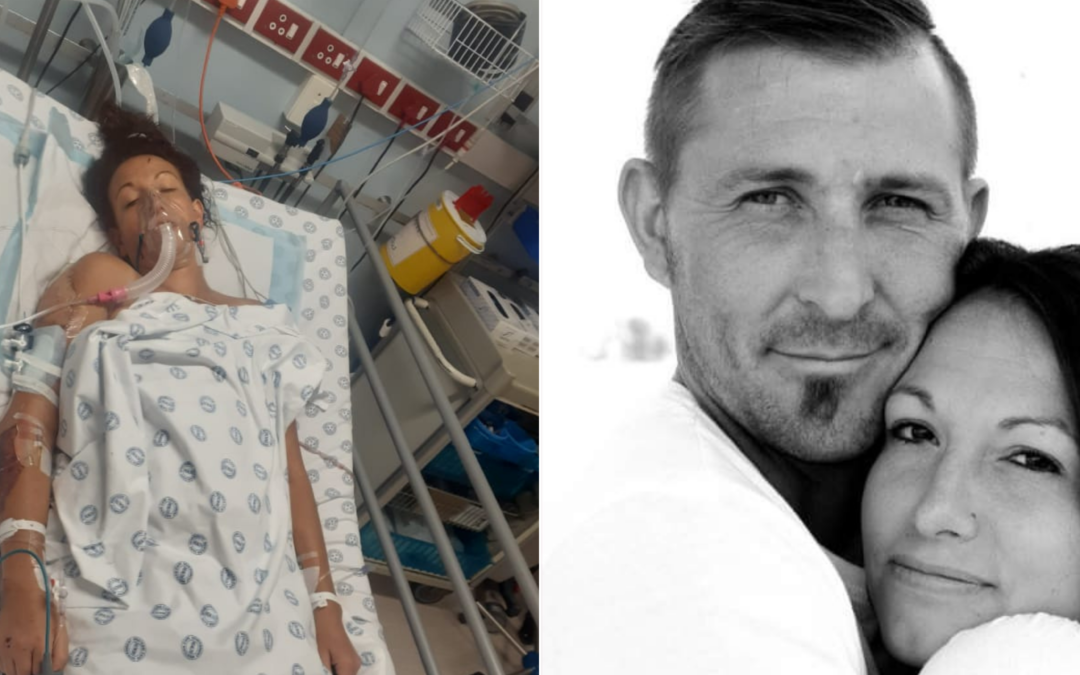 Charlene Drotsky (34), a stay at home mom from Klerksdorp, North West, was involved in a hit and run accident on 2 April 2022, while on holiday with her fiancé, Corné Viljoen (39) in Malmesbury, Cape Town.

After spending a night out with friends, a man with a bakkie offered to give Charlene and her friends a lift home. Charlene, who was the last one to be dropped off that night, could never have imagined what would happen next.

When Charlene arrived at her destination and tried to exit the vehicle, the driver reversed unexpectedly, trapping Charlene’s left leg under the front wheel of the vehicle.

Instead of stopping to help Charlene, who cried out in pain, the panicked driver tried to make his escape, driving over Charlene’s waist with the front and back tyre of his vehicle, before leaving her in severe pain on the road.

Charlene Drotsky before the accident

Hearing the commotion outside, Corné rushed to Charlene’s side and phoned emergency services. The driver had already vanished.

The case is currently under investigation at Malmesbury Police Department.

Currently, Charlene is being treated for critical injuries at Tygerberg Hospital in Cape Town.

She’s sustained multiple injuries including a broken scapula, pelvis and several broken ribs. She also suffered internal bleeding that resulted in her contracting septicemia and had bleeding on her lungs that needed to be drained.

Due to the damage to Charlene’s pelvis, she has lost the function of her left leg and faces a long road to recovery.

“Charlene is a wonderful mother and a kind-hearted person who didn’t deserve to be discarded the way she was. This incident has devastated our family, especially Charlene’s two boys, Cayden (13) and Calden (9), who weren’t convinced that she survived the ordeal. They don’t understand what has happened and cry daily for her to come home” – says Charlene’s sister, Marcelle

As Charlene doesn’t have medical aid, and Corné has been unable to work while spending time at Charlene’s side in the hospital, Marcelle, Charlene’s sister, has launched a crowdfunding campaign on BackaBuddy to assist the couple during this difficult time.

Hoping to raise R75 000 with the support of generous donors, the family hopes to transfer Charlene to a private hospital in Klerksdorp, where she can get the best possible care, and be close to the boys that miss her dearly.

Funds raised will also help cover Charlene’s medicine, walking aids, as well as the physical and emotional therapy she will need to recover. Additionally, funds will also be set aside to support the family with their living expenses.

Charlene Drotsky with her sons Cayden and Calden

“The most difficult thing is feeling hopeless and helpless when someone you love is struggling or in pain. We hope that the public will help lighten the financial burden we are facing and help us seek justice for what has happened to Charlene. We couldn’t be more thankful for the love and support we have already been shown” – says Marcelle

An update on Charlene

“Charlene sat for the first time this week (after almost 2 months in bed). She sat up in her bed with both her legs on the ground. Charlene is very determined to walk again. The doctors are extremely happy with her progress. Another issue she now faces mental health. Charlene has not yet received any physiology treatment and we are still waiting for a physiologist. She has a lot of trauma and is falling into depression.

Charlene still has lots of pain but is doing very well. She lost a lot of weight. Since the accident happened, Corne, her fiancé has left his work in order to assist with Charlene’s daily needs. This has caused them to have no income and lose their home and are fighting to keep their vehicle. I have taken their two sons in to take care of them while they are in Tygerberg. Corne has been staying with wonderful people giving him a place to sleep and a plate of food to eat.

Since I started the campaign, we have realised that there are still good people out in the world and people willing to help. The money raised for Charlene will definitely help them in the future when Charlene starts therapy and physio from home. We hope to help them find a new home as well.

I definitely learned that a helping hand can change so much for any person, (kindness still exists). I hope to pay the helping hand forward one day and help others in need. Thank you for your kind heart and donations. I could never stop saying thank you.” – says Marcelle